The City of Davis Utilities Commission is considering on February 19 whether to disregard the preliminary recommendations of the Commission’s Enterprise Fund Reserve Policies subcommittee to establish a transparent, relatively rigorous and consistent method for setting City reserves. The Staff Report, written by the now-departed finance director, ignored the stated objectives of both the Utilities and Finance and Budget Commissions to develop a consistent set of policies that did not rely on the undocumented and opaque practices of other communities. Those practices had no linkage whatsoever to risk assessment, and the American Water Works Association’s report that the Staff relied on again to reject the Commission’s recommendation again fails to provide any documentation on how the proposed targets reflect risk mitigation—they are simply drawn from past practices.[1]

The City’s Finance & Budget Committee raised the question of whether the City held too much in reserves over five years ago, and the Utilities Commission agreed in 2017 to evaluate the status of the reserves for the four City enterprise funds—water, sanitation/waste disposal, sewer/wastewater, and stormwater. A Utilities Commission subcommittee reviewed the current reserve policies and what is being done by other cities. (I was on that subcommittee.) First, the subcommittee found that the City was using different methods for each fund, and that other cities had not conducted risk analyses to set their targets either. The subcommittee conducted a statistical analysis that allows the City to adjust its reserve targets for changing conditions rather than just relying on the heuristic values provided by consultants.

The subcommittee’s proposal adopted initially by the Utilities Commission achieved three objectives that had been missing from the previous informal reserves policy. Two of these would still be missing under the Staff’s proposal:

The Finance and Budget raised at least two important issues in its review:

Finally, the Staff proposal raises an issue about the appropriate basis for determining the sanitation/waste removal reserve target. The Staff proposes to base it solely on direct City expenses. However, the enterprise fund balance shows a deficit that includes the revenues and expenses incurred by the contractor, first Davis Waste Removal and then Recology. We need more specificity on which party is bearing the risk of these shortfalls before determining the appropriate reserve target. Given the current City accounting stance that incorporates those shortfalls, I propose using the Utility Commission’s proposed method for now.

Based the analysis done by Utilities Commission subcommittee and the recommendations of the Finance & Budget Committee, the chart above shows the target % reserves for each fund without the debt coverage target. It also shows the % reserve targets implied by the Staff’s proposed method.[2] The chart also shows corresponding dollar amount for the proposed total target reserves, including the debt reserves, and the cash assets held for those funds in fiscal year 2016/2017. Importantly, this new reserve target shows that the City held about $30 million of excess reserves in 2016/2017.

[2] The amounts shown in the October 16, 2019 Staff Report on Item 6B do not appear to be consistent with the methodology shown in Table 1 of that report.

M.Cubed produced four reports for Sustainable Conservation on using floodwaters to recharge aquifers in California’s Central Valley. The first is on expected costs. The next three are a set on the benefits, participation incentives and financing options for using floodwaters in wetter years to replenish groundwater aquifers. We found that costs would range around $100 per acre-foot, and beneficiaries include not only local farmers, but also downstream communities with lower flood control costs, upstream water users with more space for storage instead of flood control, increased hydropower generation, and more streamside habitat. We discussed several different approaches to incentives based on our experience in a range of market-based regulatory settings and the water transfer market.

With the PPIC’s release of Water and the Future of the San Joaquin Valley, which forecasts a loss of 500,000 acres of agricultural production due to reduced groundwater pumping under the State Groundwater Management Act (SGMA), local solutions that mitigate groundwater restrictions should be moving to the fore.

Don Cameron at Terranova Ranch started doing this deliberately earlier this decade, and working with Phil Bachand and UC Davis, more study has shown the effectiveness, and the lack of risk to crops, from this strategy. The Department of Water Resources has implemented the Flood-MAR program to explore this alternative further. The Flood-MAR whitepaper explores many of these issues, but its list of beneficiaries is incomplete, and the program appears to not yet moved on to how to effectively implement these programs integrated with the local SGMA plans. Our white papers could be useful starting points for that discussion.

We develop a structural empirical model of the US banking sector. Insured depositors and run-prone uninsured depositors choose between differentiated banks. Banks compete for deposits and endogenously default. The estimated demand for uninsured deposits declines with banks’ financial distress, which is not the case for insured deposits. We calibrate the supply side of the model. The calibrated model possesses multiple equilibria with bank-run features, suggesting that banks can be very fragile. We use our model to analyze proposed bank regulations. For example, our results suggest that a capital requirement below 18 percent can lead to significant instability in the banking system.

Why are we not using Davis’ wealth of human capital to our advantage? Why don’t we assign, and even hire or retain, these individuals to prepare these analyses for commission review? An interesting discussion about the failures and lessons for broad scale retraining programs.

My own thought is that we need to buy out the homes of displaced workers at the higher of either their purchase cost or the assessed value to facilitate moving to a new job location.

Source: Where Should All the Coal Miners Go? – Pacific Standard 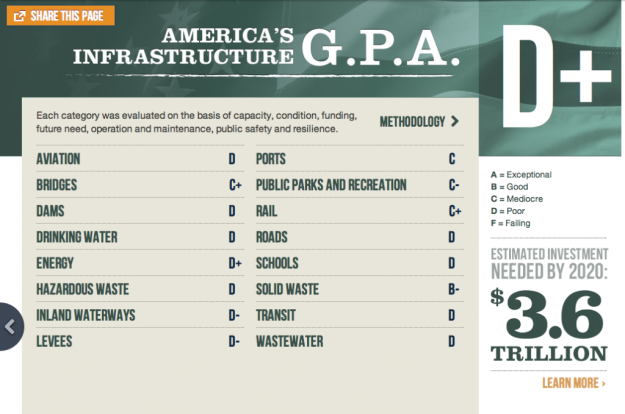 At the core of the dissatisfaction driving support for Brexit, Donald Trump (and Bernie Sanders) is economic dislocation that reduced the jobs and wages of those who worked in the manufacturing and construction industries. The solution is NOT to return to retail manufacturing, where the U.S. can’t compete with China; nor is it to extract more fossil fuels in a highly volatile energy market or to build houses for another financial bubble. Instead we can address their needs while solving a different crisis–fixing our crumbling infrastructure, and even get some other ancillary benefits. We would have both construction and heavy manufacturing jobs with good wages, aimed right at the Brexit/Trump constituencies. And there would be little foreign competition while we put the U.S. economy on better footing to compete in other sectors.

The American Society of Civil Engineers estimate that America needs $3.6 trillion of investment in replacing our infrastructure such as roads, waterworks, power and gas lines and the rest that makes American go. This sounds like a big number, but it’s only a bit more than half of what all federal, state and local governments spend annually. Of course, we would never pay for all of this at once. In our current low-interest environment, at 3% bond financing over 30 years, the annual cost would be $180 billion, which is less than 3% of total spending.

The key is to use disciplined deficit spending, i.e., bonded indebtedness, to finance this program. Funds should be earmarked specifically for this program at the federal, state and local levels. One source of funds could be a wealth tax. A tax rate of 0.2% (yes, two tenths of a percent) on registered securities and real estate could cover the annual debt repayments.

We could tie this program to two other possible goals:

Severin Borenstein at the Energy Institute at Haas blogged about the debate over moving to residential fixed charges, and it has started a lively discussion. I added my comment on the issue, which I repost here.

The question of recovery of “fixed” costs through a fixed monthly charge raises a more fundamental question: Should we revisit the question of whether utilities should be at risk for recovery of their investments? As is stands now if a utility overinvests in local distribution it faces almost no risk in recovering those costs. As we’ve seen recently demand has trended well below forecasts since 2006 and there’s no indication that the trend will reverse soon. I’ve testified in both the PG&E and SCE rate cases about how this has led to substantial stranded capacity. Up to now the utilities have done little to correct their investment forecasting methods and continue to ask for authority to make substantial “traditional” investment. Shareholders suffer few consequences from having too much distribution investment–this creates a one-sided incentive and it’s no surprise that they add yet more poles and wire. Imposing a fixed charge instead of including it as a variable charge only reinforces that incentive. At least a variable charge gives them some incentive to avoid a mismatch of revenues and costs in the short run, and they need to think about price effects in the long run. But that’s not perfect.

When demand was always growing, the issue of risk-sharing seemed secondary, but now it should be moving front and center. This will only become more salient as we move towards ZNE buildings. What mechanism can we give the utilities so that they more properly balance their investment decisions? Is it time to reconsider the model of transferring risk from shareholders to ratepayers? What are the business models that might best align utility incentives with where we want to go?

The lesson of the last three decades has been that moving away from direct regulation and providing other outside incentives has been more effective. Probably the biggest single innovation that has been most effective has been imposing more risk on the providers in the market.

California has devoted as many resources as any state to trying to get the regulatory structure right–and to most of its participants, it’s not working at the moment. Thus the discussion of whether fixed charges are appropriate need to be in the context of what is the appropriate risk sharing that utility shareholders should bear.

This is not a one-side discussion about how groups of ratepayers should share the relative risk among themselves for the total utility revenue requirement. That’s exactly the argument that the utilities want us to have. We need to move the argument to the larger question of how should the revenue requirement risk be shared between ratepayers and shareholders. The answer to that question then informs us about what portion of the costs might be considered unavoidable revenue responsibility for the ratepayers (or billpayers as I recently heard at the CAISO Symposium) and what portion shareholders will need to work at recovering in the future. As such the discussion has two sides to it now and revenue requirements aren’t a simple given handed down from on high.